FINISHIT is a game about finishing short crazy phrases. It's super easy to play and totally hilarious. It's the only game where you gotta be great or totally suck to win!

Be the BEST or WORST at finishing short phrases to win cards. Take turns being the JUDGE, the SCRIBES, or the BOMBER. First player (or players) to acquire five cards wins! 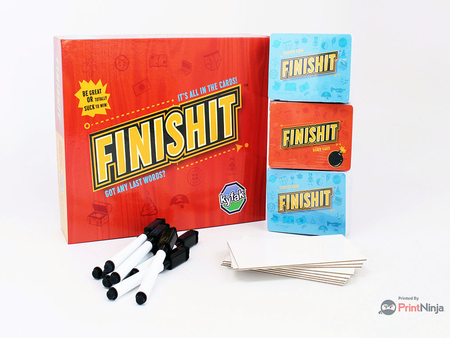 Recommended for 4 to 9 players. See below to learn how to play with just 3 players.

OBJECT: FINISHIT is simple to play. The Scribes and Bomber compete to win cards by composing endings to short phrases, hoping to have the BEST or WORST submission - but watch out for the BOMB, it changes everything!

The Judge initiates a new round by reading a Starter Card to the other players. At the end of the round, The Judge judges the Scribes' responses; and awards cards for the BEST and WORST endings of that round.

All players, except the Judge, are Scribes, they compose endings to the phrases on the Starter Cards.

The Bomber is also a Scribe who gets to select and drop the Bomb Card AFTER all responses have been submitted. The Bomber collects and reads all submissions to the Judge for judging.

How Do I Win Cards?  In each round the Scribes or the Bomber can win a card by having the BEST or WORST submission as decreed by the Judge.

The oldest person shall be the first Judge, who then shuffles the deck of 240 Starter Cards, takes the top one, and reads it aloud.

The Bomber, is the person to the left of the Judge.  They shuffle the Bomb Deck and take THREE Bomb Cards to consider privately. The Bomber picks one of the three cards - this card is called The Bomb; keep it secret, keep it safe. Discard the other two bomb cards.

All Scribes, including the Bomber, compose an ending to the Starter phrase. The Bomber collects all the responses.

The Bomb:  Once all endings have been submitted... The Bomber shuffles the responses and drops The Bomb! Once revealed, The Bomb adds a new element to the middle of phrase which can make or break the endings submitted by the Scribes - does your phrase shine or suck?!

Passing Judgement:  Now that the full leading phrase (Starter Card + Bomb Card) is known to all players, the Bomber reads each submission to the Judge, and is always careful to not let the Judge know who wrote what, AND always READS THE FULL LEADING PHRASE before reading each of the Scribes’ ending’s. This gives consistency and context to each response and helps the Judge make sound judgements.

orange Bomb Card.  This marks the end of

At the end of a round, discard used cards; then pass the decks clockwise around the circle such that the Bomber from round one now becomes the Judge for round two, and so on.  The Slates are returned to each player and made ready for the next round.

FINISHIT is won by the first player, or players, who wins 5 cards of any colour... they can be Starter or Bomb cards – mix and match; have fun.

And YES it is possible to have more than one winner in FINISHIT! How cool is that!

How to Play with 3 People

In this version of the game, no single player is the Judge, instead all three players will vote on which response is the BEST or WORST.  To begin, flip over a Starter Card, then all three players proceed to write an ending to the starter phrase, not revealing their response to the others.  Then flip over a Bomb card randomly, and read the Starter + Bomb combo aloud as each player reveals their ending.  Once all three complete responses have been read aloud, the 3 players vote simultaneously as to which answer is the BEST and then which one is the WORST. We like to use 'helicopter fingers' which means, to dangle your index finger above the table and hover around in circles, count 1, 2, 3, Vote, and then drop your finger down on your selection. Try it, it's fun!

Award the cards as in the normal version of the game. In the event of a tie, no one wins a card. Play till one player gets 5 cards.

Playing Finishit with the family and the answers are super silly. Good (local) game, @kyfak_inc

“We played it on the weekend..and it was crazy funny! Loved it.” Jen P.

“This game reminds of Cards Against Humanity and Apples to Apples, only it's better because we get to make up our own answers!” Pete N.

“Had a great time playing FINISHIT last night! The game was easy to learn and funny as hell! Looking forward to playing again soon.” Laura F.

“This may be the very best game I have ever played. The four of us laughed until we cried. Such awesome fun!!!” Carey C-D.

“We laughed for hours!” Saleem P.

“I love how two people can win. So cool!” Melissa G.

“We took the game for an inaugural run after dinner last night. After everyone got comfortable with the first round - the second round rapidly devolved into an x-rated round with decidedly personal jabs and pokes. Great success, well done guys, thank you.” Terry P.

“A room full of 20 yr olds were laughing and not looking at their phones!” Heidi D.

“We played with the whole family - we just removed a couple cards that we thought the kids weren't ready for - haha. So great that the kids could play too.” Corey M.

@Kyfak_Inc Played it on the weekend with the family. Had to do a bit of curation and remove the naughty cards before the kids could play :) 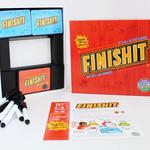 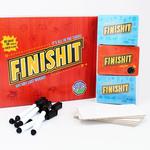 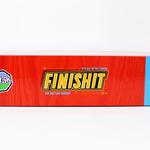 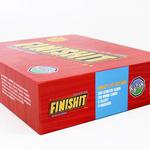 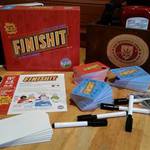 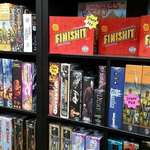 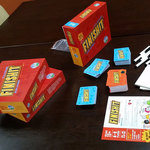 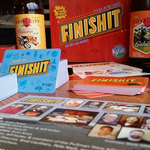 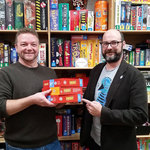 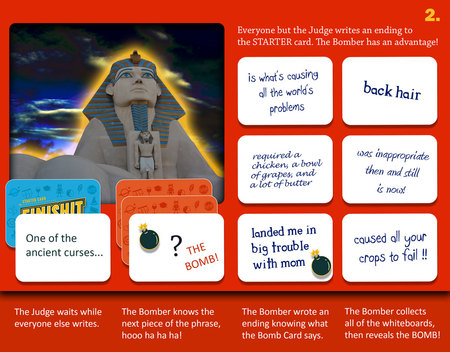 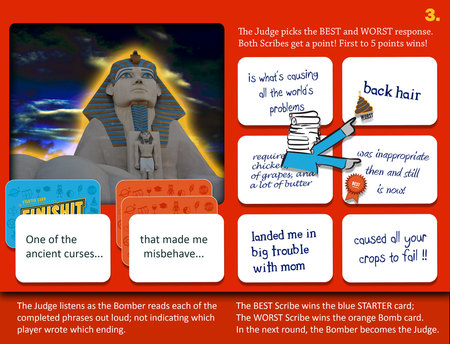 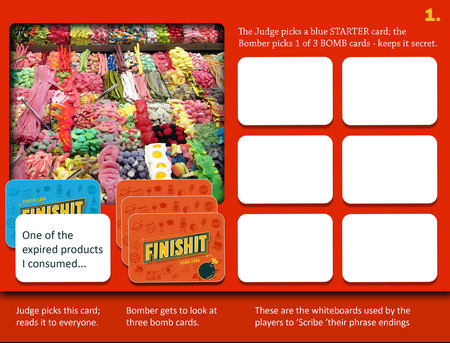 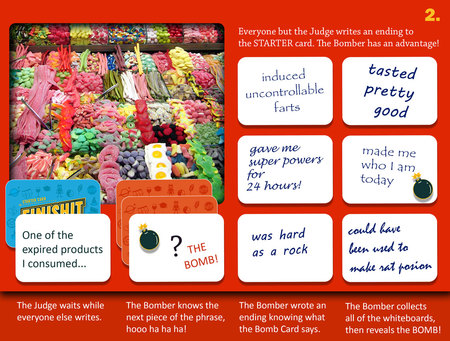 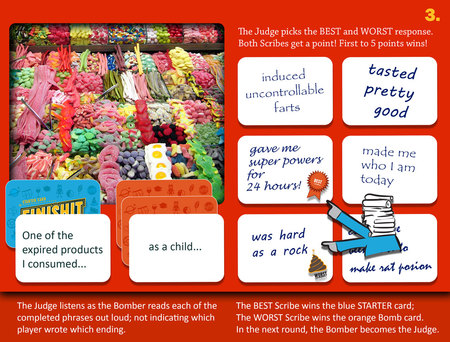 Visit Kyfak on YouTube to see videos of FINISHIT and more.

Available in these stores:

Go play FINISHIT at these board game cafes

Kyfak is grateful to all our friends and family who helped us make FINISHIT a reality. Getting a game to market is not a simple job - we are lucky enough to have friends and colleagues willing to test our game prototypes; help us with designs, logos, icons, and website shit; and of course, celebrate each victory with us. 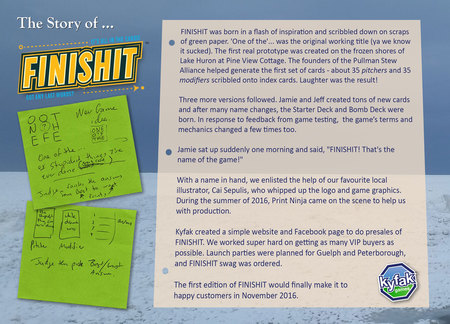 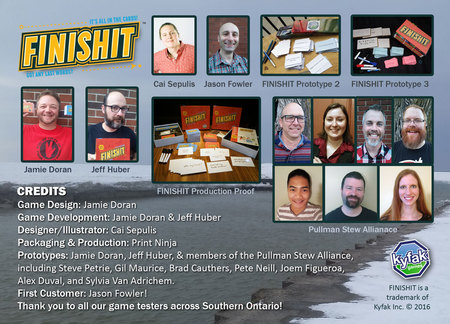 We'd also like to thank the other organizations that have supported us thus far.  We appreciate your vote of confidence and hope to do lots more with you on this crazy journey! 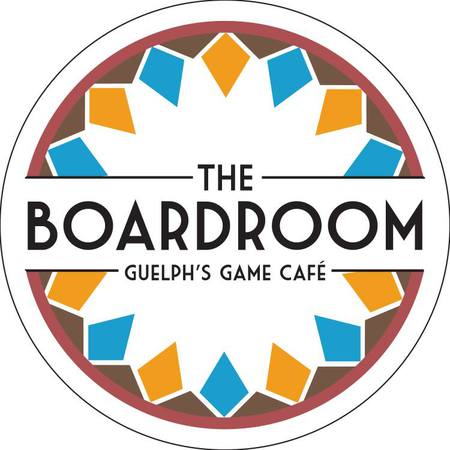